Anaktuvuk Pass is one of those places that is mythical in the minds of many Alaskans.  It’s a town you often hear about, but few ever have the chance to visit.  I remember as a kid frequently seeing it pop up on the news weather report as the state’s coldest location and wondering what it would be like to live there.  How cold is it?  Is it really up on a mountain pass?  If anything, the appeal of this mysterious place has grown in my mind; its pull is magnetic.

Last year I volunteered with an awesome program called NanaNordic which is working to introduce skiing to native villages throughout Alaska.  It was an incredibly rewarding experience and one of the best weeks of my life.  (You can read my account from last year’s trip to Buckland Alaska here).  All year, I’ve looked forward to a second trip with the program, and I was really excited to hear that I’d been assigned to visit Anaktuvuk Pass this spring to help introduce skiing at the school.  The other coaches assigned to the trip were Lars Flora, Amanda del Frate, and Carly Craig. The only way in and out of Anaktuvuk is by plane – there are no roads, no big rivers, and no nearby coastal ports connecting the village to the outside world.  To travel to Anaktuvuk, I took an Alaska Airlines jet from Anchorage up to Fairbanks, and then boarded a small Cessna single-engine prop for the flight to Anaktuvuk.  Anaktuvuk Pass is nestled in the heart of the Brooks Range, an expansive mountain range covering a footprint larger than that of the European Alps.  As our plane proceeded north through a valley, the foothills turned into mountains..  Further down the valley was a notch between two mountain peaks seemingly standing guard over the arctic.  We flew right through the notch with huge mountains right outside of each window.  I later found out those peaks are known as the Gates of the Arctic, the namesake for Gates of the Arctic National Park. 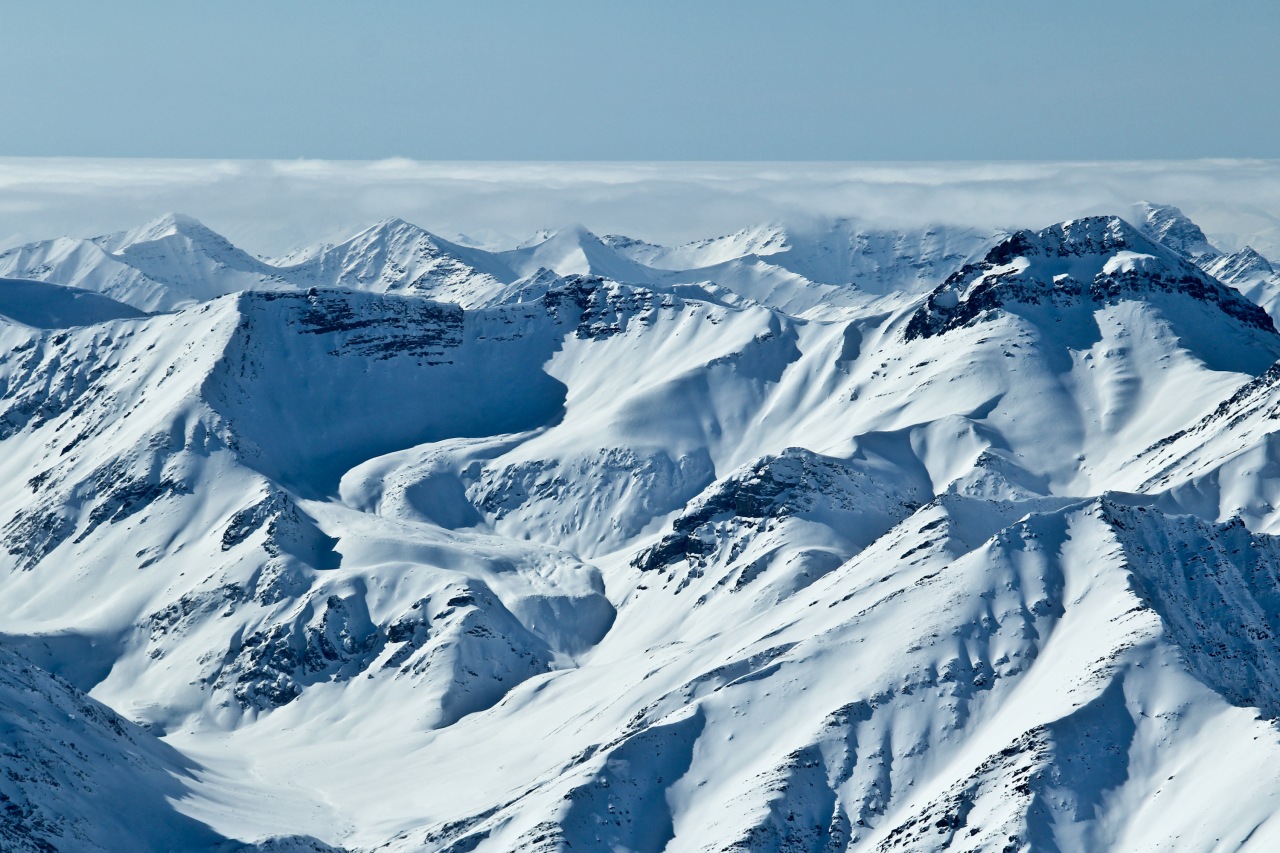 When we landed at the airstrip, we were greeted by Brooks Fry, the school PE teacher in Anaktuvuk Pass.  Brooks was super friendly in welcoming us, and started by giving us a tour of the village in the school pickup truck.  We drove every road in the village- maybe a grand total of 2 miles – in under 10 minutes. Anaktuvuk Pass is a small village with fewer than 300 residents.  The town is home to Alaska’s only inland Inupiat population, the Nunamiut.  Unlike their caostal Inupiat counterparts who depended on whale and seal, the Nunamiut historically hunted caribou, following the herds through the mountains.  They were the last documented hunter-gather population in North America, and finally settled in Anaktuvuk Pass in the 1950’s.  The town itself is small, but has a fair bit of infrastructure including the airstrip, the K-12 school, two stores, a health clinic, a gas pump, and a museum.  Everyone we encountered was incredibly friendly and welcoming. Here are some more fun facts about Anaktuvuk Pass that I learned during our stay: 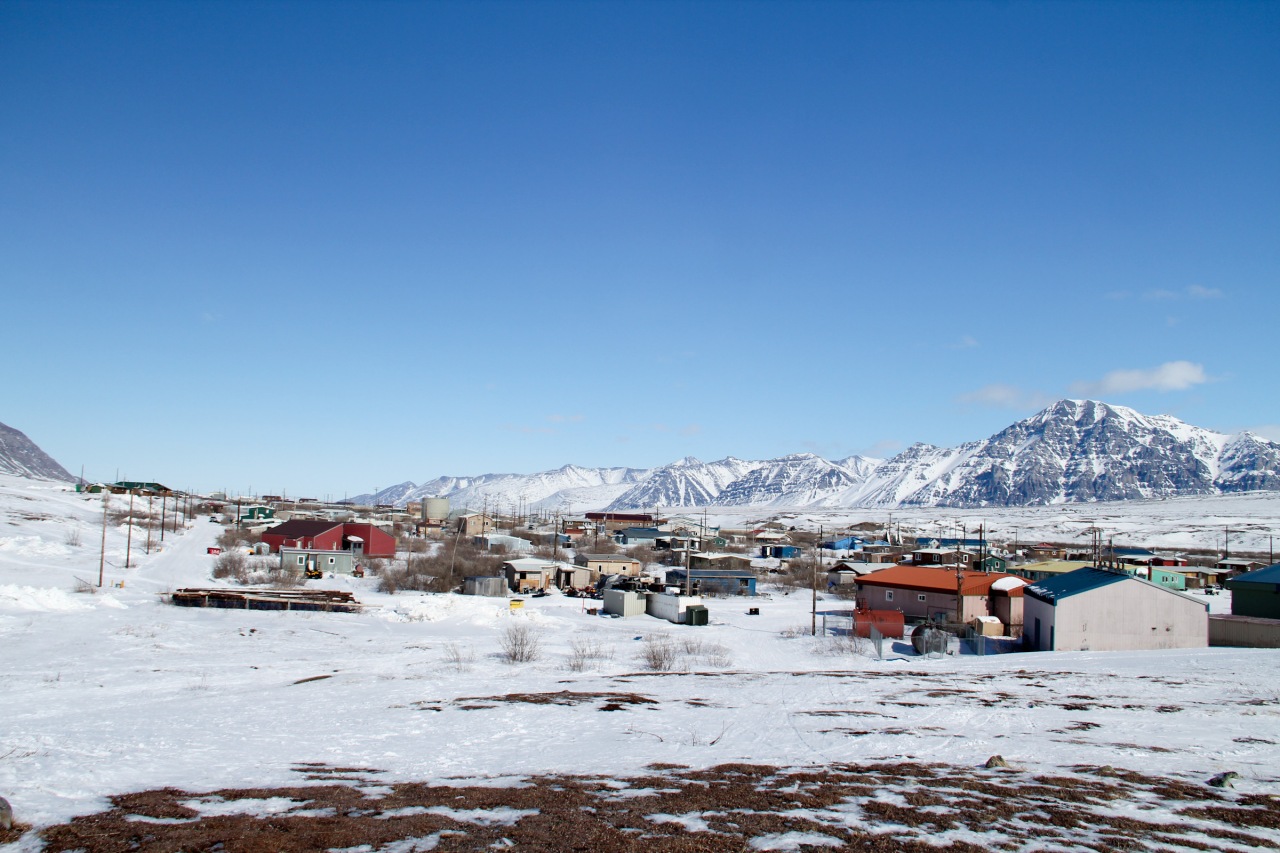 The village of Anaktuvuk Pass, viewed from the bluff overlooking town.

We were really excited to get the kids out on the snow.  On the schedule, we had lessons planned during school all day Monday-Thursday with fun after school sessions in the afternoons.  From the first day it was apparent that we had a good group of kids.  Everyone was super excited about skiing and picked it up pretty quickly.  The youngsters were especially good because they had already been introduced to some xc skiing through PE.

The 3rd and 4th graders, excited to ski!  We are standing in front of the Nunamiut School Mascot, the Wolf. 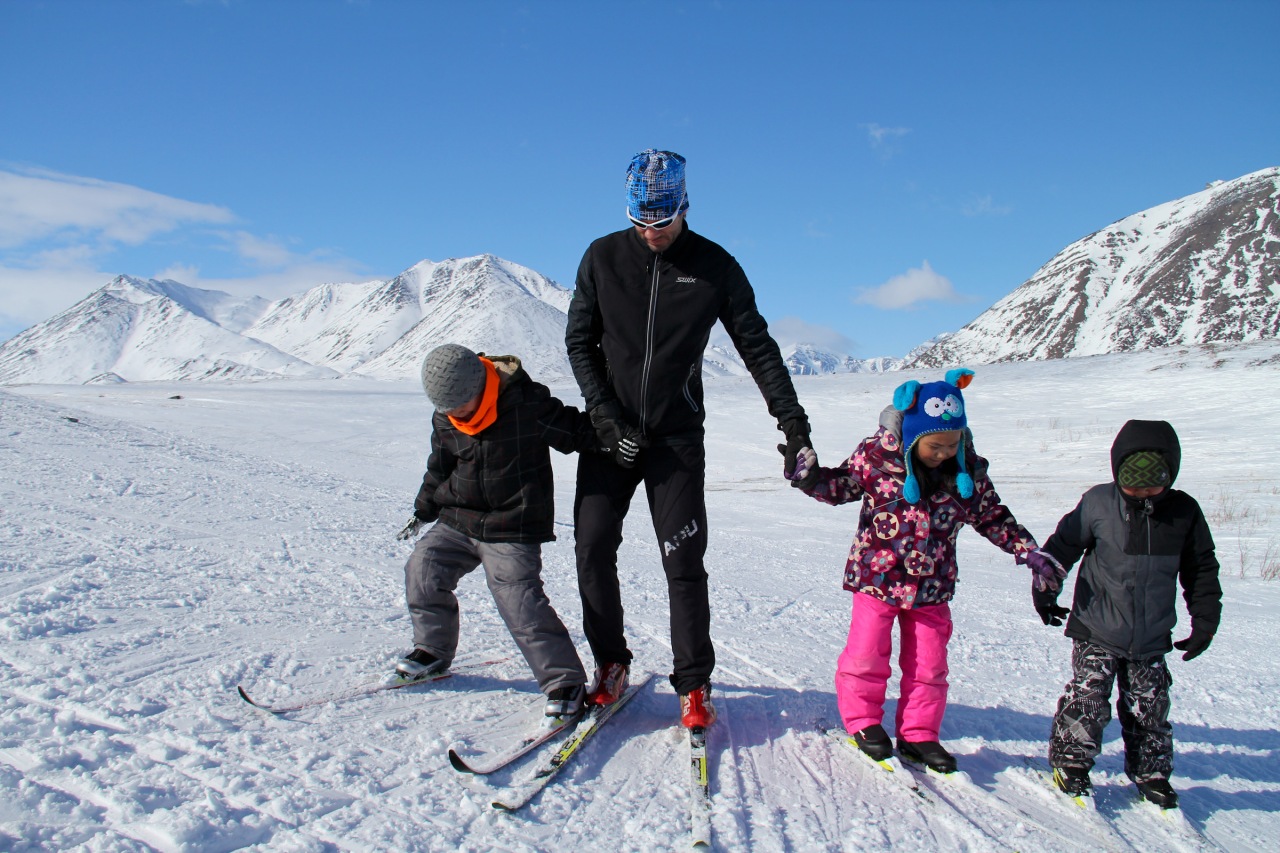 SkiKu program director Lars Flora teaching a group of students to side step up steep hills. 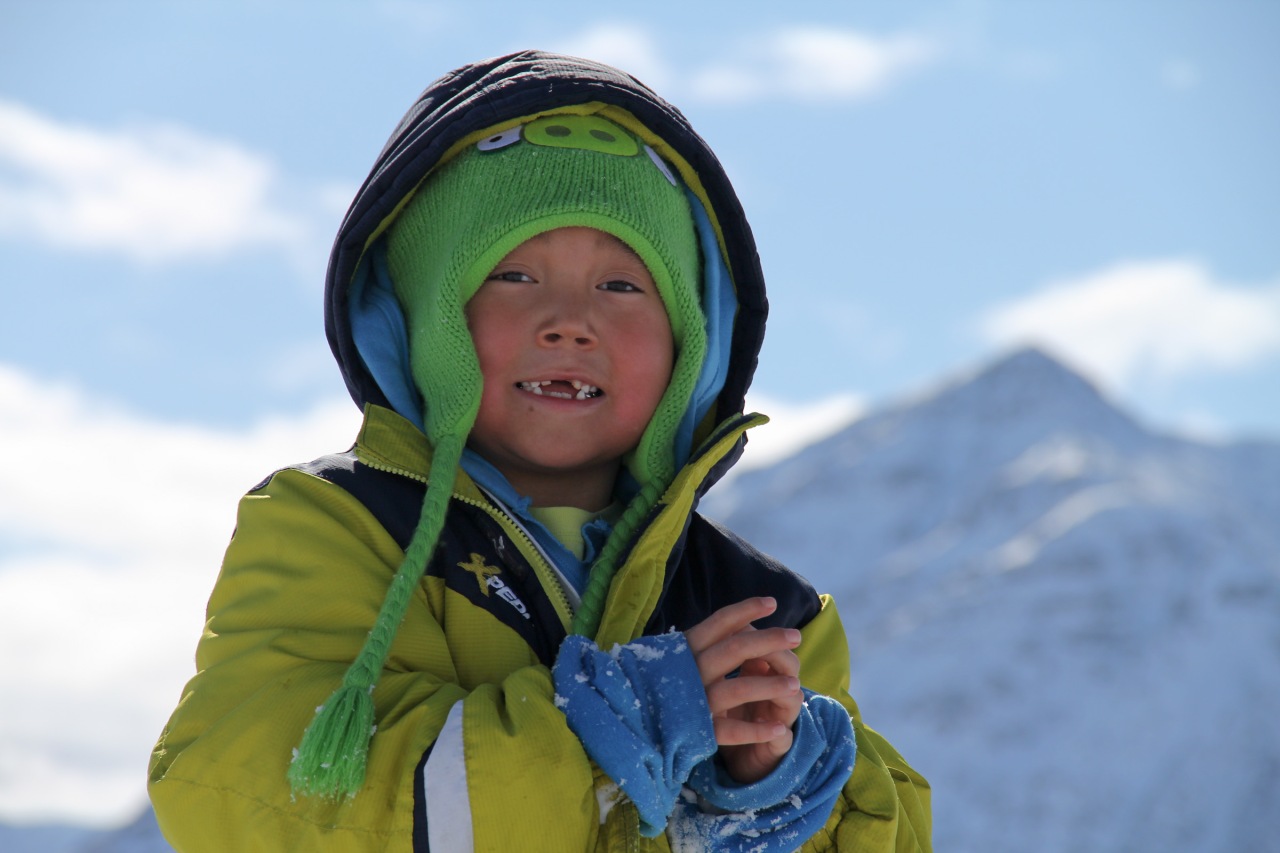 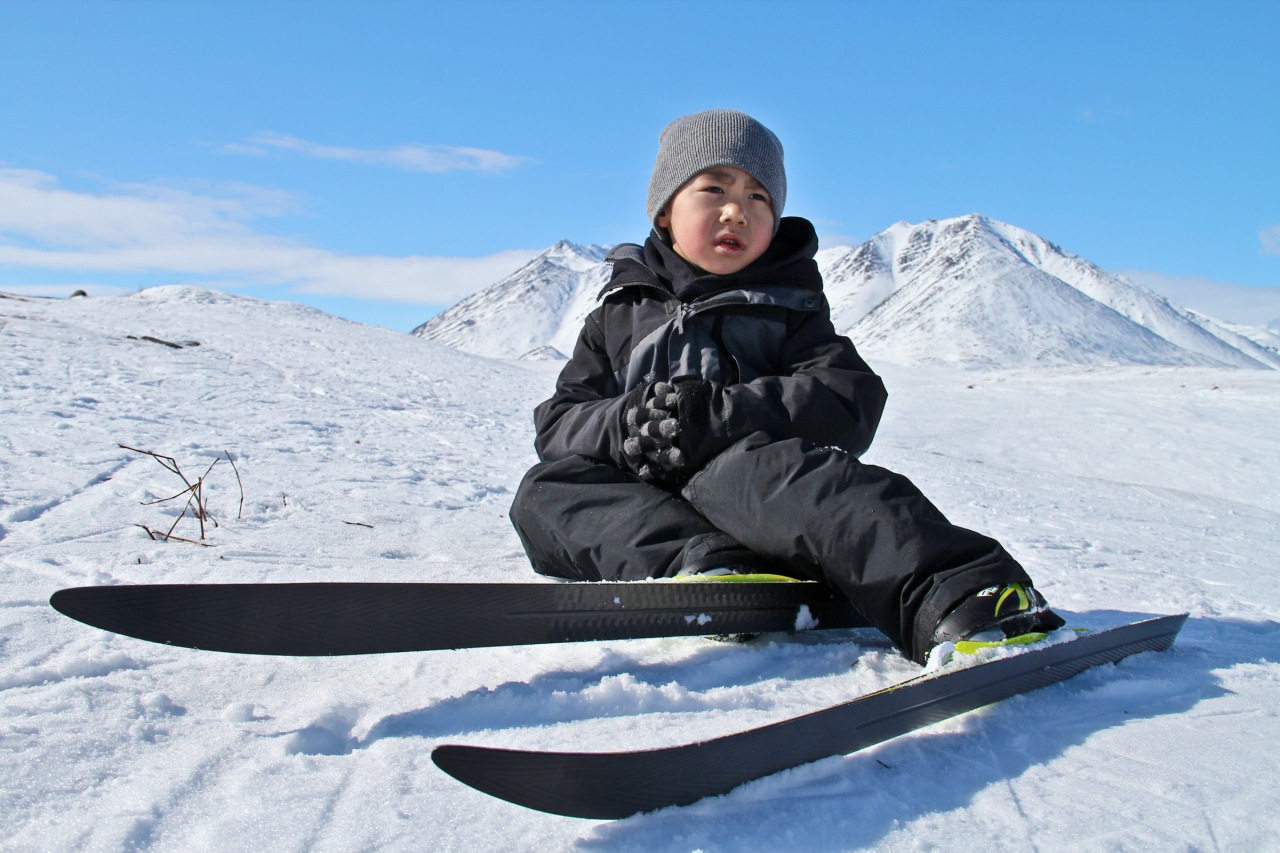 Sometimes you deserve a quick break! 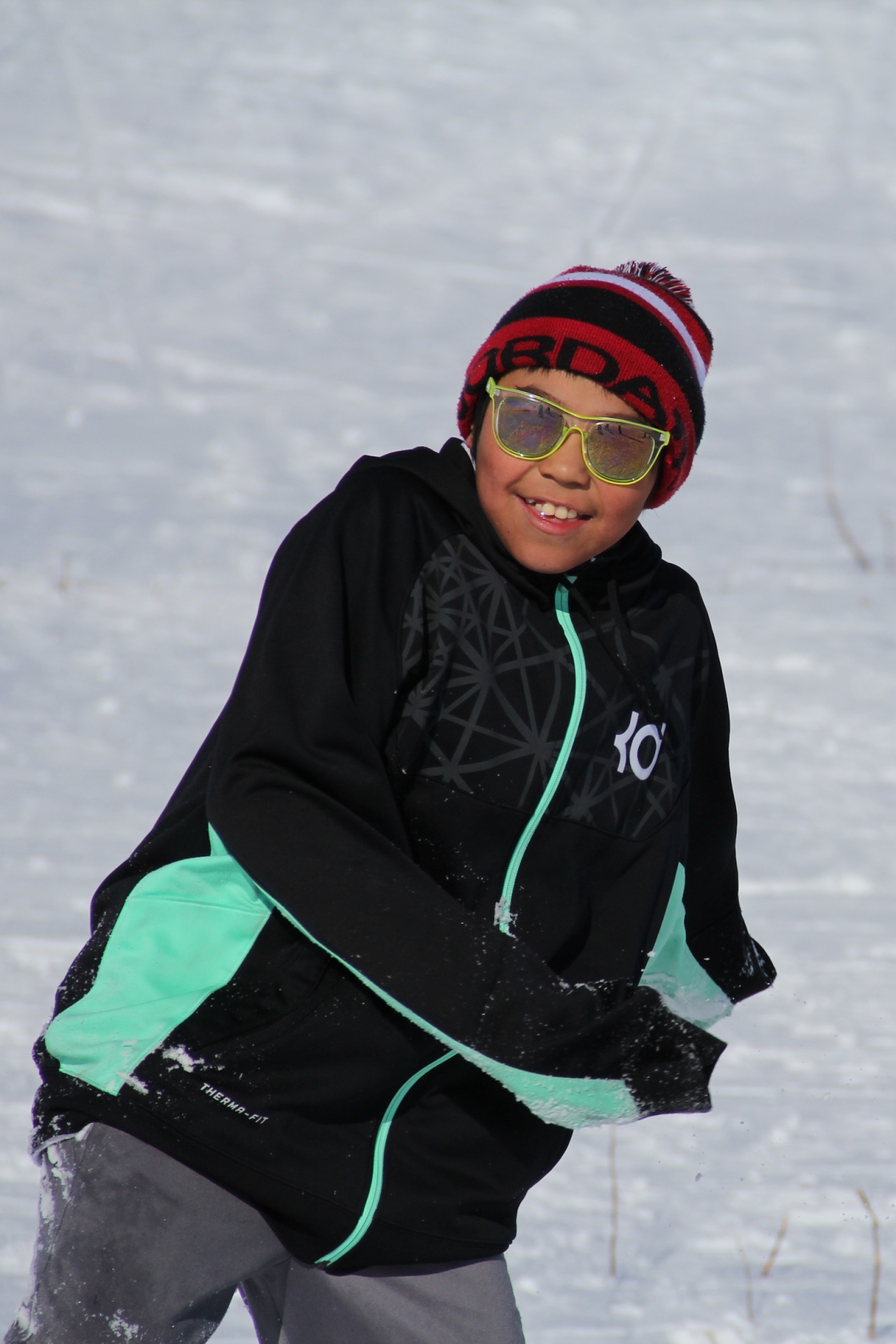 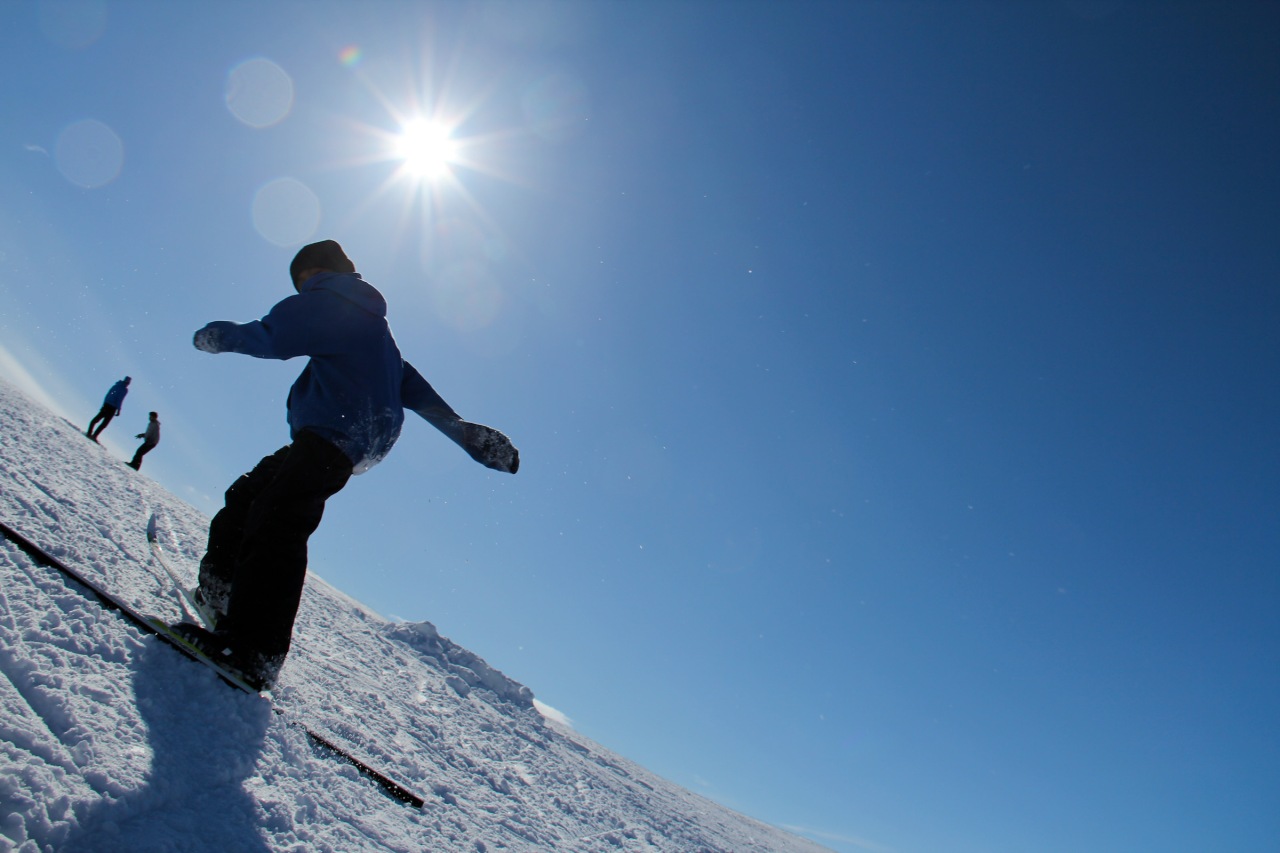 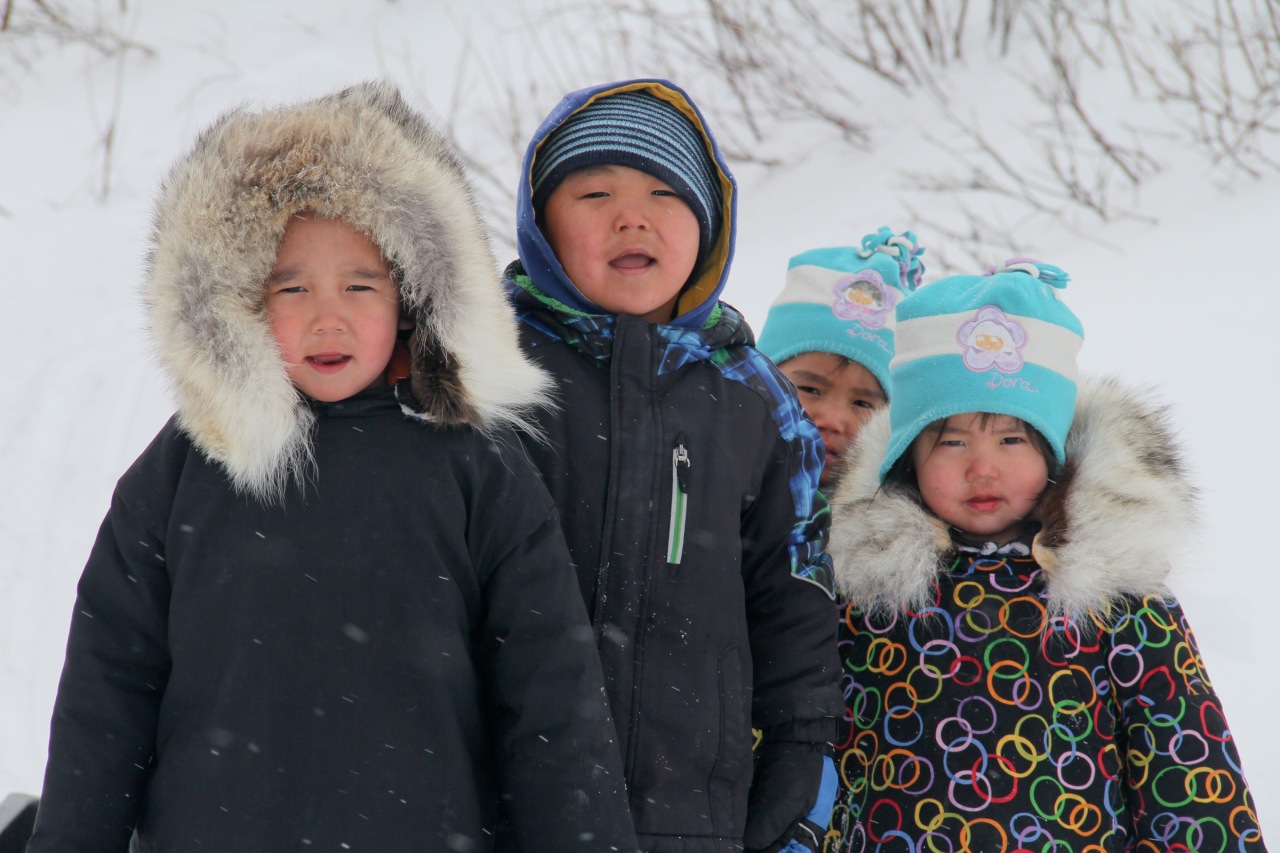 The preschool kids wanted to check out what we were up to!

Brooks took Lars and me out into the mountains one evening for a backcountry ski adventure.  We made a 4000′ ascent up a nearby peak Ingstad, and then enjoyed some incredible skiing on the way down.

Not a bad view. 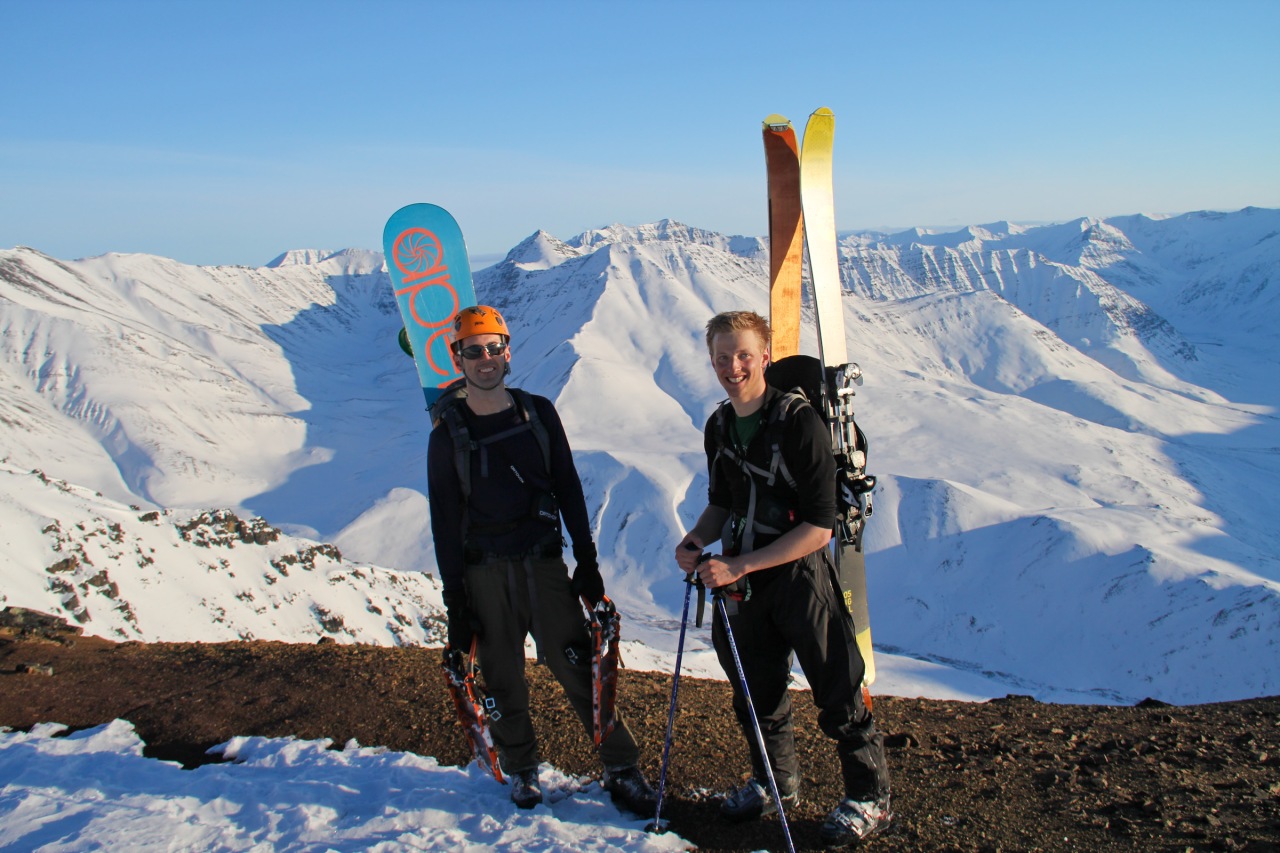 Halfway up with Brooks.

Lars and I at the top at 10pm. Luckily the April sun stays out late in the Arctic.

Contemplating some serious terrain on the way down, racing the setting sun. 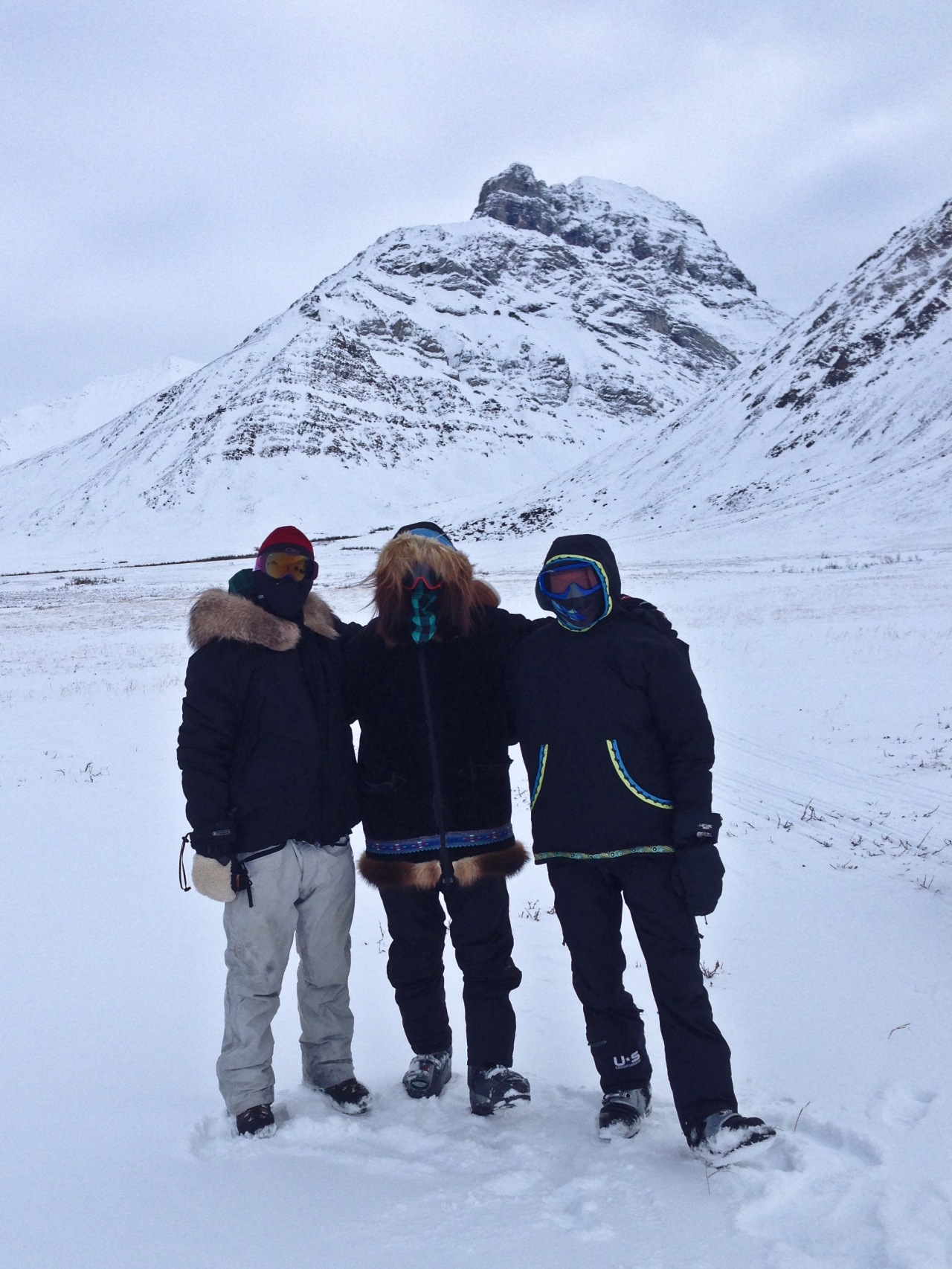 Snow machines are the best way to get around up north.  In this photo, we’re on our way back to town after an adventure. When snowmachining in the Arctic, the name of the game is no exposed skin.   Fur parkas help too!  From left to right: Brooks, myself, and Lars.

New this year with NanaNordic/SkiKu is the Biathlon component.  We brought two electronic biathlon training rifles with infrared targeting systems to school for the kids to try, and set up running biathlon races in the gym.  The kids were really into it and extremely good shots.  I think adding biathlon really broadened the appeal of the ski program and helped capture the kids’ attention.

The kids were into it, and really good!

All in all, it was again an incredible week.  It sounds cliche, but both times that I’ve participated in NanaNordic, it has felt like a once-in-a-lifetime experience.  From eating caribou soup at a community dinner to playing ultimate basketball with the kids on skis, every day was unique and memorable.  I had a blast working with the kids and it was really rewarding to see the progress made over the course of the week.

Thanks for an awesome week!  Hope to be back again next year.