After the Craftsbury Supertour week, I flew over to Europe with a group of my teammates to kick off five weeks of training and racing.   We’re here to compete on the Europa (OPA) Cup, central Europe’s version of the US Supertour.  The Europa cup tour this year includes stops in Switzerland, Slovenia, and France, and offers competitive international racing one step below the World Cup.

We started our trip with a week-long altitude camp in Livigno, Italy to adjust to the time zone and acclimate to skiing in the alps.  The crew consisted of Alaska Pacific University Teammates Reese Hanneman, Tyler Kornfield, David Norris, Chelsea Holmes, Rosie Frankowski, and myself. 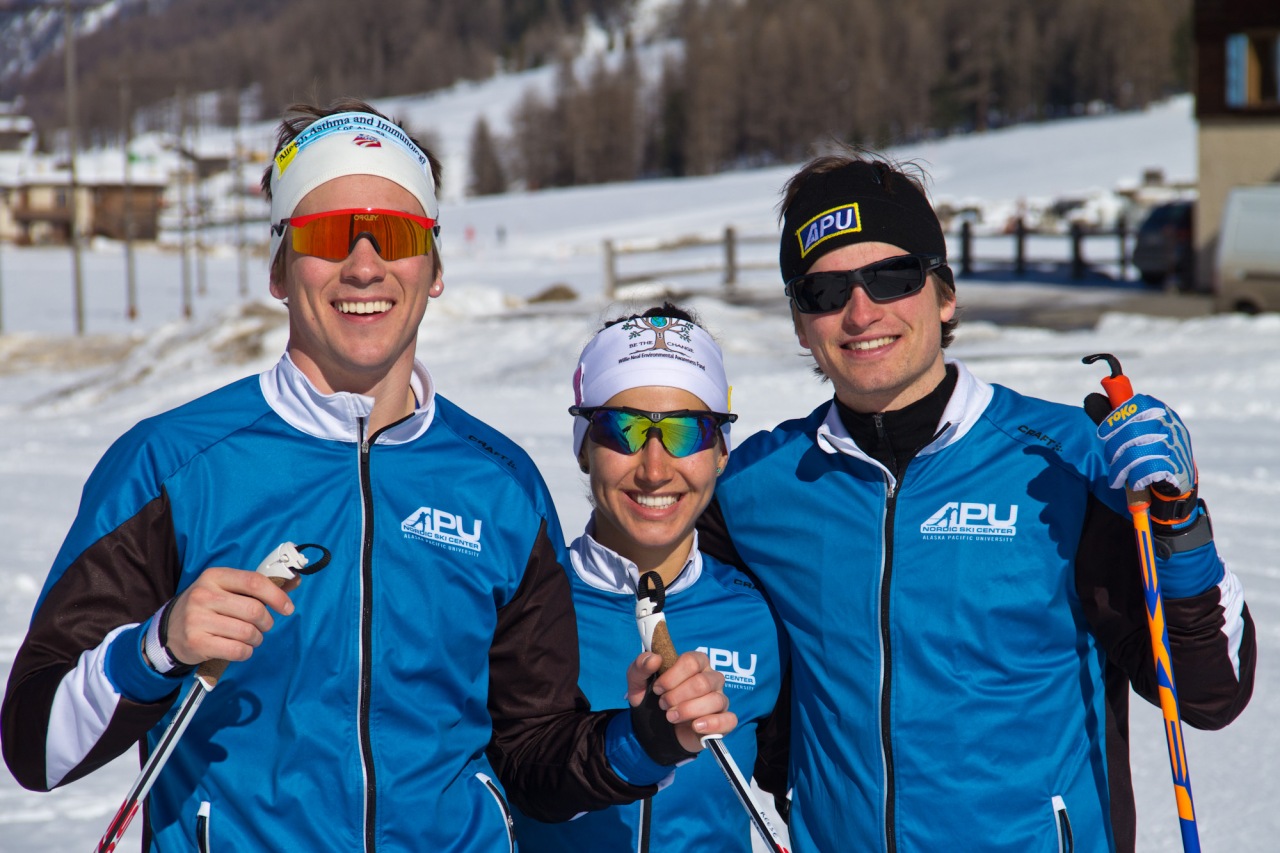 Livigno turned out to be a good place for a training camp.  With plentiful snow, great weather, and 40km of trails groomed every day, it provided everything we needed for a quality camp.  There was also the added benefit of no taxes – at some point in the 1800’s, the Austrian Empire decided to make Livigno duty free to encourage economic activity in the traditionally poor region.  The official reasoning for the duty free status was the difficulty of getting in and out of Livigno in winter.  The tax-free legacy was maintained by the Italians, and whether or not the reasoning is still valid in the era of modern roads and cars, it sure makes Livigno a (relatively) more affordable place to visit.

Ski tracks running right through the center of the valley, connecting to a 40km trail system.  Skiing is a way of life here.

The skiing was not bad!

Here’s a short video clip I made from training during the week.  Unfortunately, due to YouTube Rules, it’s only available in the US.

Livigno is best know as an alpine skiing destination, and the slopes above town looked impressive.

Looking up at the alpine slopes above town.

We stayed in hostel at the edge of town.  It offered everything we needed, with a well stocked kitchen and private rooms, one for the guys and one for the girls.  Cramming four skiers into a room can get a bit tight, but we made it work. 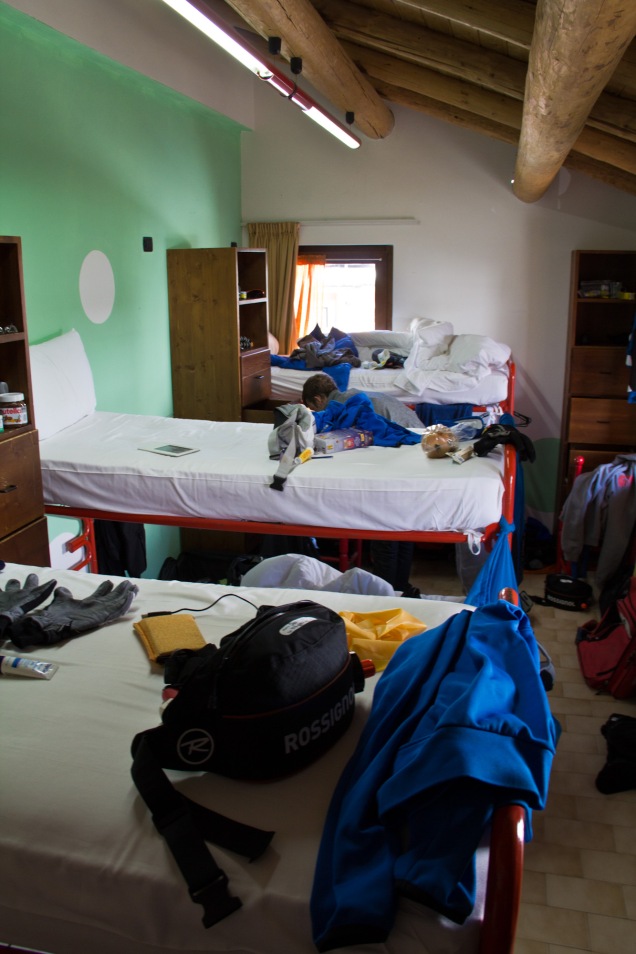 And after four skiers have taken over for the week. We kept it pretty clean, all things considered.

It was a great week, and it was tough to say goodbye to such a fun town at the end of the week. 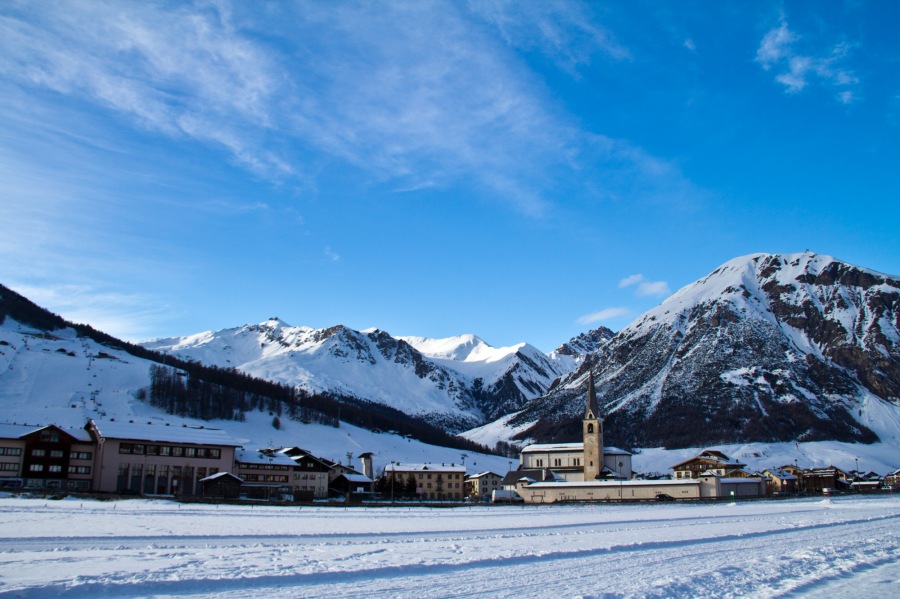 From Livigno, we drove to Campra, Switzerland for the first weekend of OPA racing.  The drive was slated to be a leisurely four hours.  In reality, it turned into an eight hour adventure.  We made it within 10 km of Campra, but had to turn back due to an avalanche… and had to make a 200 km detour to go around to get to the other side of the pass.

The Passo Lucomagno, 10km from Campra. The road was closed due to avalanche… and the detour around took close to four hours.

We stayed in Olivone, about 20 minutes from Campra, in a restored historic house, the Casa Lucomagno. 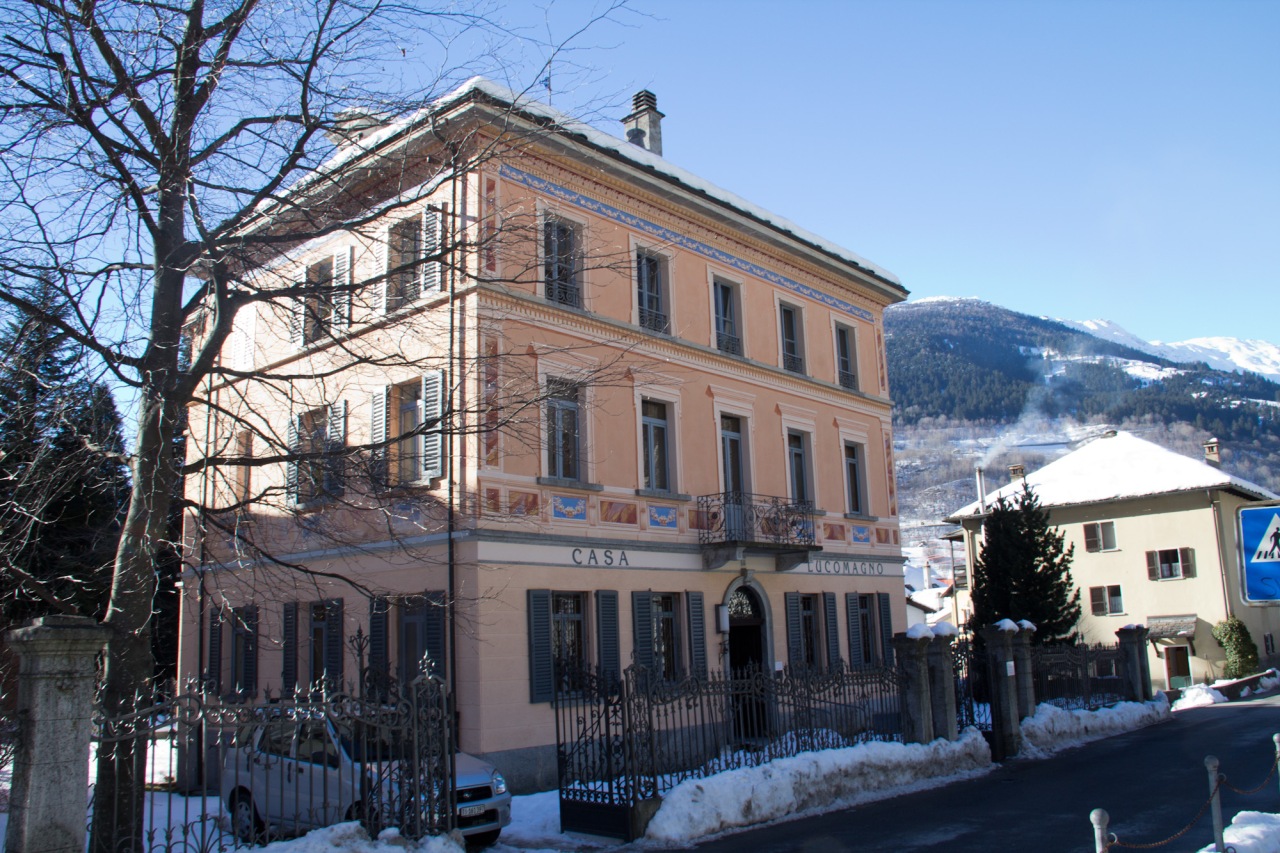 The Casa Lucomagno, our home for the week for the races in Campra

The Campra OPA cup was run in a mini-tour format, starting with a skate sprint on Friday, then a 15k individual start classsic on Saturday, and finally a 15k Pursuit start skate on Sunday.  The skate sprint didn’t go that well for me, but I started feeling better in the 15k classic.  The night before the last race, it snowed almost one meter at the venue, making for some super soft skate courses.  The race was a 15k Skate run in Pursuit format, with the starting position based on overall standing in the tour.  I didn’t have a great start position after the first two races, but ended up having a great race and skiing up into the top-30 of the mini-tour.  It was my first top-30 in the OPA cup for distance, and I was happy with the effort.  Chelsea Holmes took some great photos of the race. 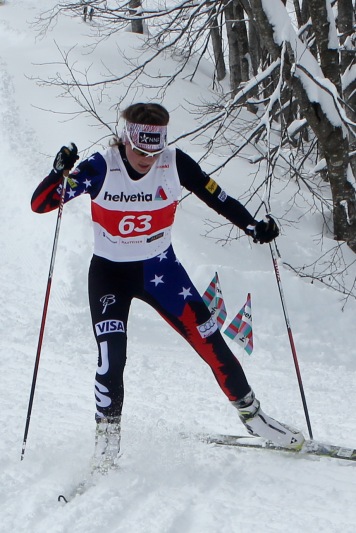 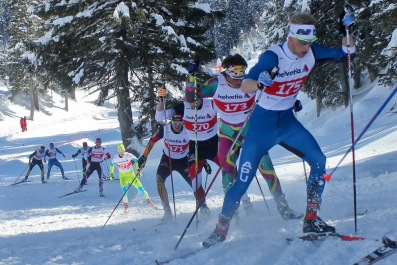 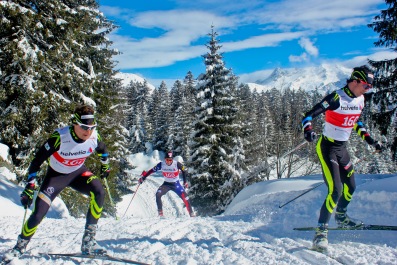 After the races in Campra, it was time to make the drive to Rogla, Slovenia.  The night before the drive, we realized that the route would take us right by Venice, and that Venice might make a pretty awesome lunch spot.  I’ve been to Venice once before, but no-one else in the van had seen it. We had a discussion in the van, going back and forth about whether it was a good idea.  On one hand, Venice is a bit tricky to get into – even though it was only a 15 minute detour off our route, getting into the actual city takes a bit of work.  The risk was getting on the road late, and then getting lost in Slovenia, and being late for meeting the rest of the OPA team.  In the end, we decided that 50 years from now, no one would remember missing dinner, but we all would probably remember seeing Venice.  The decision was made.

There are no streets in Venice, only canals and walking paths.  We parked the van and took a Vaporretto (Venetian public water taxi costing 7 euro) down the Grand Canal.

Houses along the water 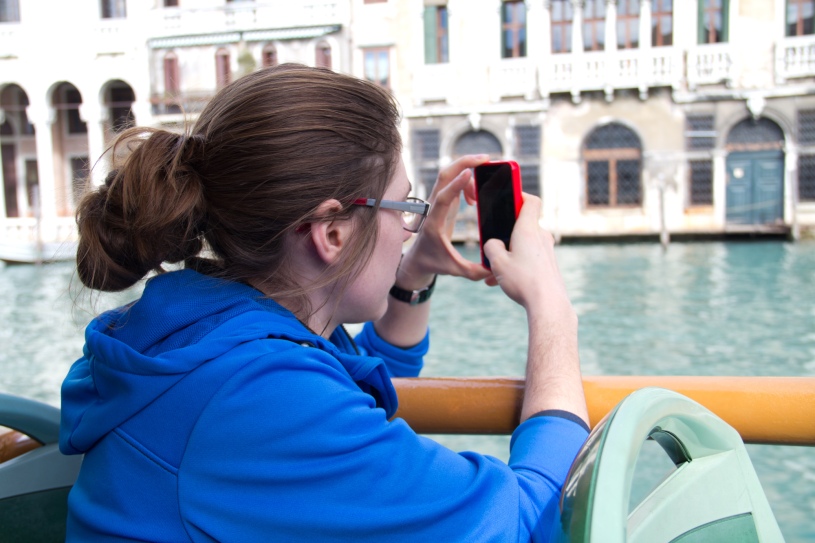 Chelsea Holmes was excited to take it all in! 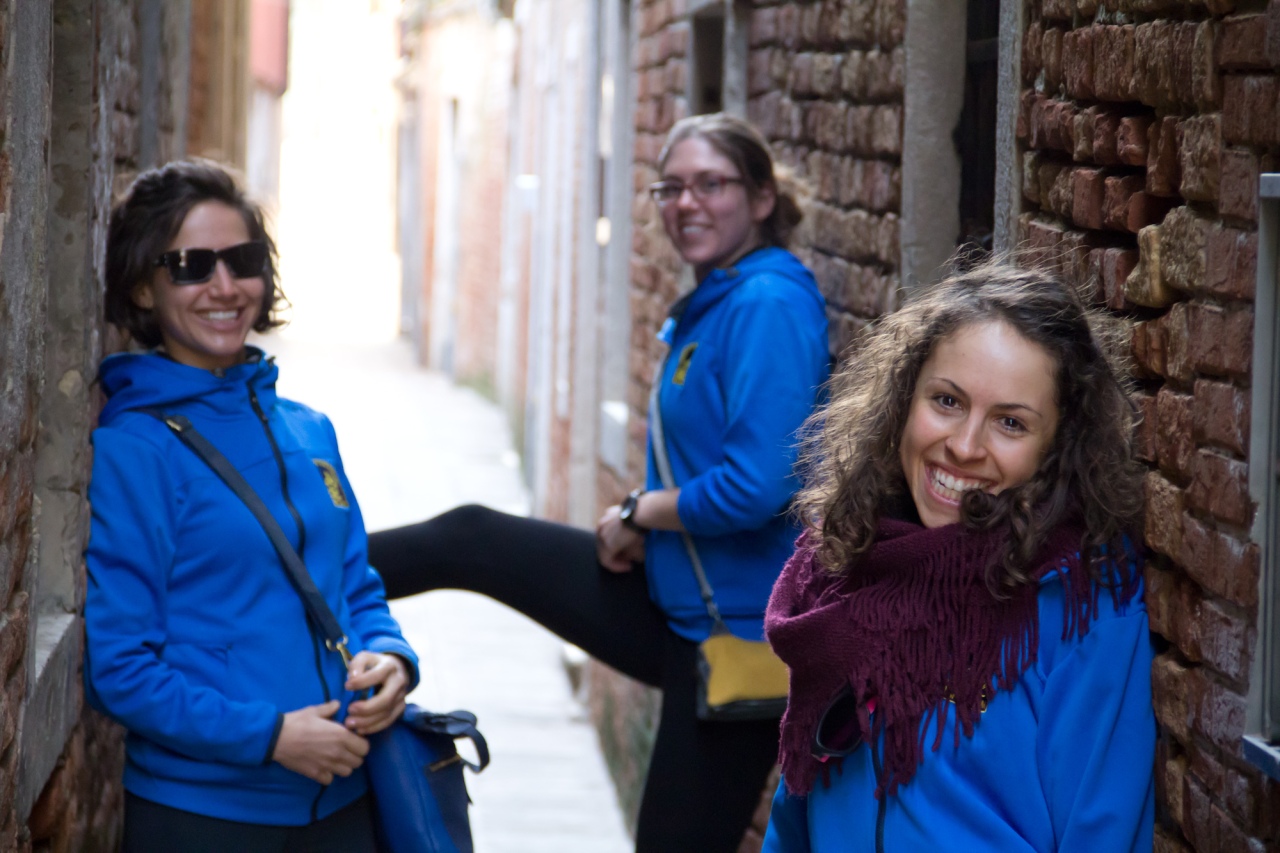 The narrow “streets” of Venice form a labyrinth through the city. Chelsea, Becca, and Rosie.

We stopped for some sandwiches and gelato, and enjoyed the scene.  Before long (way too soon) it was time to hit the road again.

We’ve now made it to Rogla and are preparing for the upcoming OPA cup races this weekend – a skate sprint on Saturday, and a 30k mass start classic on Sunday.

If you haven’t already, please check out the APU grouprev page to help support us on this trip!  You can find it here.